According to a source close to Katrina Kaif, the wedding would take place in the evening, with Vicky Kaushal and her family members and close friends in attendance. 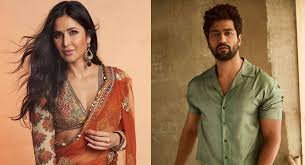 Vicky Kaushal and Katrina Kaif may have refuted all wedding rumors, but it hasn’t stopped fans from speculating and anticipating their rumored December wedding. And with new revelations emerging on a daily basis, it’s difficult not to get enthusiastic about the purported Bollywood romance. If Pinkvilla’s rumor is correct, Vicky and Katrina’s fans have a lot to be thrilled about since a source close to the actress has told the portal that they will marry on December 9.
Salman Khan’s Father, Salim Khan, Reacts to Katrina Kaif and Vicky Kaushal’s Wedding Rumors
The actors are planning to conduct the celebrations at the Six Senses Fort Barware, a resort in Sawai Madhopur, Rajasthan. According to the source, there will be an evening Hindu wedding with family and close friends in attendance. The entertainment portal also said that Katrina and Vicky’s personnel are hard at work buying plane tickets and arranging accommodations for all of their guests who will be arriving for their wedding.