Maa Kamakhya Devi Temple’s story in Guwahati Assam, Kamakhya Temple is located in India, 8 km from Guwahati near Assam’s capital Dispur. This temple is the temple of Sati, the goddess of strength. This temple is built on a hill and also has tantric significance.
There is no picture or idol of the Goddess in the sanctum sanctorum. This is a better place for Tantric accomplishment. It is included in the 51 Shakti Peeth of Goddess. In the sanctum sanctorum, there is only a vagina-shaped stone. This unique temple is of the vaginal form of Maa Bhagwati.This revered place of tantrikas around the world. The vaginal form of Goddess is called Mahamudra. The entire universe is considered to be the focal point. Closed every month for three da 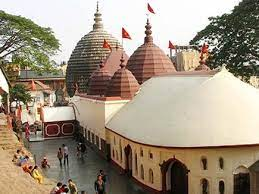 According to the legend, Goddess Sati married Lord Shiva. Sati’s father Raja Daksha was not happy with this marriage. Once King Daksha conducted a yajna but did not call Lord Shiva, Sati’s husband. Sati was angry with this and reached her father’s house without calling. On this matter, King Daksha insulted her and her husband a lot. Insult to her husband was not endured by her and Havan jumped into the tank. As soon as this information was known, Lord Shiva also reached the yagna and left the place with the body of Sati. He started doing the Tandava with the body of Sati, Lord Vishnu threw Sudarshan Chakra to stop him. With this cycle, Sati’s body was cut into 51 parts and fell from place to place. In this, the vagina and womb of Sati fell on the place of this Kamakhya temple i.e. Nilachal mountain. In this place, King Nara Narayana of Bihar built a temple in the 17th century.

In Indian society, while on the one hand it is considered forbidden to enter the temple and religious rituals, considering women as impure, on the other hand, on the other hand, mother Kamakhya Devi, a symbol of power, is worshiped as holy during menstruation. Kamakhya Devi is called the Goddess of flowing blood. It is believed that every year in June, Kamakhya Devi is menstruating and with her flowing blood, the water of the entire Brahmaputra river becomes like red color.

Anbuwachi fair is organized every year in this temple. Tantriks from all over the country come to participate in this fair. It is believed that during these three days, the mother Sati menstruates and blood flows in place of water in the water tank. The temple doors remain closed for these three days. After three days, they are opened with great fanfare. Every year the water of the Brahmaputra river during the fair turns red. It is believed that this water is the cause of the mother’s menstruation.

How to visit kamkhya   Temple

By Train–The city of Kamakhya has its own header called Kamakhya station. However, it is advisable to disembark at Guwahati station because it is very well connected with all the major Indian cities. Being the largest train station in northeastern India, the maximum number of trains from other metropolitan areas and Indian cities stops here. When you arrive at Guwahati Station, look for a car with a meter or a taxi with a meter for the hotel you wish to register or go to the temple if you plan to have the darshan first.

By Bus–  The distance between Guwahati station and Kamakhya temple is about 8 km. Exit the station and cross the pedestrian bridge. Go ahead and you will find several auto-rickshaws, taxis, and buses. The general price of the rickshaw car is around Rs 100, and car-sharing trips cost Rs 15 per passenger. The buses of the tourism department of Assam also cross the temple and the train station. It takes approximately 20 to 25 minutes to reach the temple from the station, depending on traffic and time of day. Alternatively, you can also get off at Kamakhya station and hire local transportation to get to the temple. The advice of registering first at the hotel, to cool down a bit and keep your luggage in the room before going to theMaa Kamkhya Devi temple to darshan.