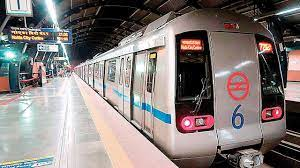 After a gap of about 60 days, the Delhi Metro Rail Corporation (DMRC) is prepared to resume its operations in the next 24 to 48 hours. Reportedly, the DMRC is ready to be fully staffed and prepared to operate double headway across all lines in Delhi to keep the frequency of trains high.

Reportedly, the DMRC will bring in customer facilitation agents at the metro station entry gates to do a thermal screening of passengers. According to the Standard Operating Procedures of the DMRC, only asymptomatic passengers will be allowed to enter the metro stations. Only COVID-19 negative passengers will be issued QR code-based tickets, which will be linked with the Aarogya Setu mobile app. It has been made mandatory for all Delhi metro passengers to download the Aarogya Setu mobile app.

News also has it that cash transactions will be discouraged except in exceptional circumstances, and Token Vending Machines (TVMs) at the metro might be disabled.

Reportedly, the housekeeping staff has been already deployed for the cleaning of Delhi metro stations. DMRC’s Customer Relations employees have been asked to show up for briefings on the new Standard Operating Procedure that will govern the Delhi Metro services.

Reports state that the frequency of metro trains will be to the maximum capacity on the first day of resumption of services. The idea behind this action is to check out operational preparedness.

A DMRC official told the daily that there are no guidelines from the government on restarting Metro operations; the Central Government had shared the SoP with the metro train operators in India. The SoP states that metro trains will stop for 30 more seconds at each station to ensure social distancing among the passengers. A do not occupy sticker has been put on every alternate seat inside the trains and passengers who stay standing inside the train will have to maintain a distance of one meter.