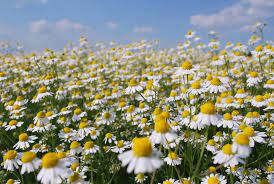 Chamomile is cultivated for flowers with medicinal properties. Many medicinal properties are found in its flowers, due to which it is also called panacea medicine. Chamomile cultivation can be done easily even in less irrigated places. Because of which it is being grown easily and on a large scale even in the barren lands of Hamirpur and Bundelkhand districts of UP state. Its flowers have a wonderful fragrance that brings peace to the mind. Chamomile plants have been mentioned since ancient times, from Greek, Egyptian and European countries to Buddhist monks.

Its cultivation is going to give more profit at less cost. Because of which most of the farmer brothers are getting more attracted towards chamomile cultivation.

Chamomile plants can be grown in any land. If you cultivate it in fertile land, you can get a more profitable yield. There is no special effect of climate on its plants. It grows easily even in cold weather. P.H. of the land in chamomile cultivation. Value doesn’t even matter. For land preparation cultivator is used for productivity.

Level the land for chamomile cultivation. For good yield, plough well to mix cow dung manure or organic manure in the soil. After this, the soil is pulverised by ploughing with the rotavator, and the field is levelled by placing the boards. Plants are transplanted in this flat and dry field. Also, many farming attachments are used such as power tiller and more.

Chamomile seeds are sown as seedlings. It takes 750 GM seeds to plant plants per hectare of field. Saplings are prepared from these seeds in the nursery in the month of October to November. After which they are taken out from the nursery to plant these plants by the middle of November. Plants have to be planted in the field at a distance of 30 to 50 cm.

Very beautiful flowers are found in chamomile plants, which are a symbol of simplicity and peace. Its flower has a lot of medicinal properties. Chamomile is a beneficial medicine for everyone, be it stomach disease or skin disease. It is also beneficial in problems like insomnia, burning sensation, nervousness and irritability. Apart from this, its flowers are also used in the treatment of wounds, sprains, rashes and injuries.

Farmer Pravesh Kumar, who lives in Saharanpur district of Uttar Pradesh, is earning more profit by cultivating chamomile. Pravesh says that chamomile has been produced in his village for the last 15 years. Farmers get double the profit from its farming as compared to traditional farming.

Chamomile is an aromatic plant, which is used in making cosmetics and also in making medicines. Its lower part is used as medicine and flowers are used to make beauty products. Farmers who cultivate wheat and paddy can also cultivate chamomile easily, and can earn more profit than those crops. Some companies are getting Chamomile cultivated on contract with farmers. Farmer brothers can also sell chamomile flowers directly in the market.

Where to buy chamomile seeds

Medicinal plant specialist says that currently only two varieties of chamomile exist. The first is Vallari and the second is German variety. Its production has recently started in India, so you cannot find chamomile seeds everywhere. But you can buy these seeds from Kajri, a government organisation of Jodhpur. Apart from this, Chamomile seeds can also be obtained from NBRI, CIMAP, RRL-Jorhat and other agricultural universities located in Lucknow.

Chamomile plants grown in hilly areas can produce flowers 10 to 12 times, and flowers can be produced only 6 to 8 times in the plains. About 28 to 30 KG flower yield is available from one acre field. Dry these flowers well in a shady place. Powder is made from these dried flowers, then this powder can be used as tea.

For further similar reports you can follow us. Moreover, with us you can get more enhancive things through blogs.